Just as I set my foot into the TGV to France, I got the SMS from Apple that they delivered my MacBook Air. Luckily my sister was able to get the package in my absence.

I arrived back in Switzerland on Thursday and been configuring my MacBook since then (With the exception of the 1. August as this is our national holiday).

First thing I did was install most of my favorite applications from getmacapps.com. With this tool I could install Google Chrome, Firefox, Dropbox and many more useful apps with a single terminal command.

In the meantime I configured my system to sync my calendar, contacts and mails with my Google Account so I can add events from my native calendar app.

Because the synchronization app didn’t support 2 step authorization yet, I had to use a Application-specific password to login with my Account.

Next in my list of to be had applications was PhpStorm from Jetbrains. It is just my absolute favorite PHP IDE which works on all major operating systems (Linux, Windows, Mac ).

I also made use of my second computer license for Adobe CC Applications to install Photoshop.

For my LAMP stack I am trying MAMP out at the moment. I will write a detailed review for this program at a later point. However until now I don’t have anything bad to say about it. In short it supports virtual hosts, multiple php versions and has a developer-friendly interface.

After the installation of getmacapps.com was finished I had installed the following applications: Google Chrome, Mozilla Firefox, Opera, Skype, Dropbox, ITerm, Sequel Pro , the Mac Github App and Alfred.

Now that I had the basics setup I tried setting up one of my working projects: Fly

I started by cloning the repository with the Github App and then created a new virtual host with MAMP.

As I worked in this project with Symfony I installed my dependencies with composer. After the installation I generated the database and dumped my dummy data into it and refreshed the cache. 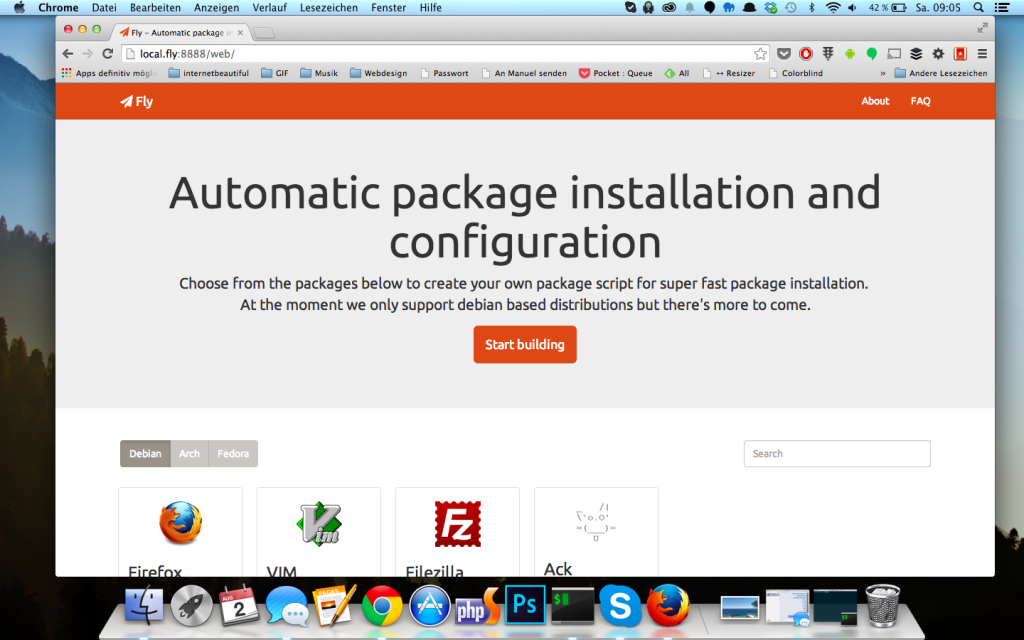 And voilà. The development installation was working.

Thank you for reading this post. Like always if you have any corrections or questions feel free to comment below. I’ll try to get back to you as soon as possible.

Get around the Netflix VPN block with Smartflix

Building a dashboard in a pictureframe for my flat

The Japanese philosophy of Wabi-sabi