We needed to stop asking about the meaning of life, and instead to think of ourselves as those who were being questioned by life—daily and hourly.

I’ve finished reading the book “Man’s search for meaning” by Viktor E. Frankl. He was a Austrian psychologist who witnessed the second world war in a concentration camp.

Before he became a prisoner in the concentration camp he was working with suicidal students and women. His key topics were depression and the prevention of suicide.

In 1938 he was forbidden to treat Aryan patients because of his Jewish heritage. After rejecting a visa from the USA, he was deported into concentration camp on the 25th of September 1942.

There he worked as a practitioner and soon was assigned to the psychiatric ward because of his skills in psychiatry. In October 1944 Frankl was transported to the Ausschwitz concentration camp and at the end of the month was moved to Kaufering where he worked as a slave laborer.

In March 1945 he was moved to a camp in Türkheim where he worked as a physician until April 1945, when the camp was liberated by American soldiers. 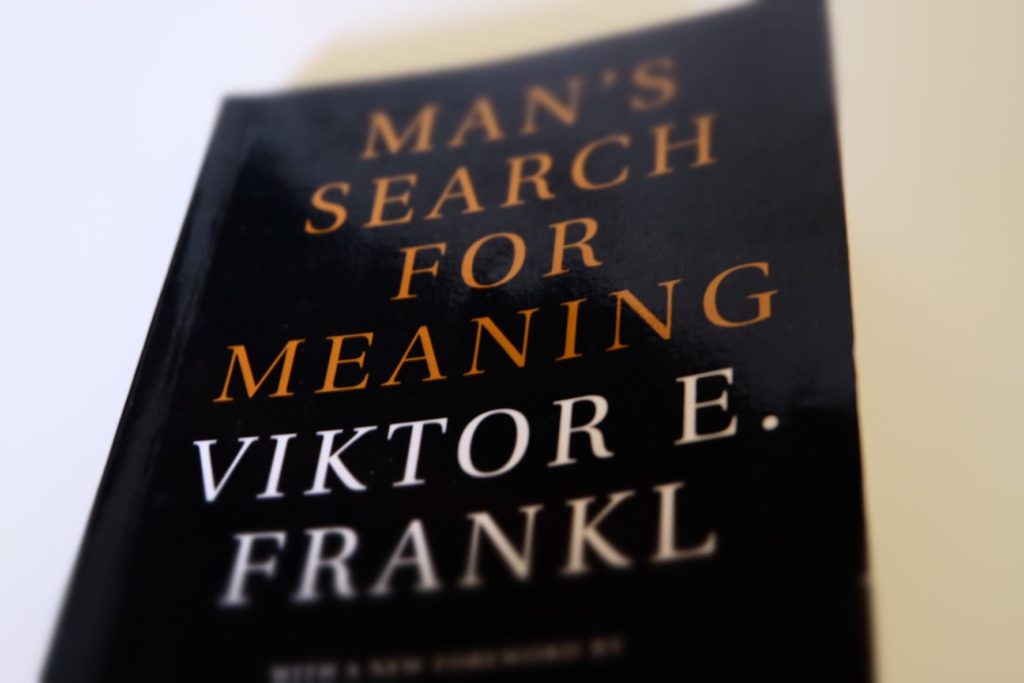 The book contains various quotes which he combines with his experiences in the concentration camps.

“Everything can be taken from a man but one thing: the last of the human freedoms—to choose one’s attitude in any given set of circumstances, to choose one’s own way.”

When Frankl was deported into the first concentration camp he had to give up all physical and social values. He was forced to take off his normal clothes and had to wear clothes of a prisoner who had been killed in a gas chamber.

He was no longer a psychologist who was respected, only a number in the crowd. People whose purpose of life was tightly coupled with their title and their position in society were now lost without those values.

Frankl however still had his purpose of life. He wanted to help other people find the meaning of their life and to get them to continue living. He also had a manuscript of a book with new insights, which he desperately wanted to finish.

“A man who becomes conscious of the responsibility he bears toward a human being who affectionately waits for him, or to an unfinished work, will never be able to throw away his life. He knows the “why” for his existence, and will be able to bear almost any “how”.”

With the knowledge that humans can endure almost anything if they have a purpose, he tried to help the other prisoners find a reason to continue living and stay strong.

For some it was a relative, which could still be alive and would be waiting for them at the end of the war. For others like Frankl it was a unfinished work or thought which they needed to finish working on.

Prisoners who didn’t find a meaning, were the first ones to perish as they had already given up on life. But the ones which found a meaning stayed strong.

“When we are no longer able to change a situation, we are challenged to change ourselves.”

In a concentration camp prisoners had no choice and weren’t able to change their situation. This led them to change themselves and their view of the situation, because they had no other choice.

“In some ways suffering ceases to be suffering at the moment it finds a meaning, such as the meaning of a sacrifice.”

If we can assign a meaning to our suffering it stops to be suffering and instead transform into a sacrifice for our goal.

“Happiness cannot be pursued; it must ensue.”

If you ask people what their goal in life is most would answer that they want to be happy. This isn’t wrong, but happiness is not something you can pursue as a goal. It’s created along the way to other goals, like meaningful relationships, through altruistic gestures or other goals which give your life purpose.

My own thoughts on the topic

Suffering is a essential part of life to prevent us from making the same mistakes again and reflect upon our failures.

The reason why we suffer after a rejection or failure is to not just run into the same situation again and repeat our mistakes.

So if you suffer from a rejection or failure it is important to reflect upon your choices you made which made you suffer and to understand that sometimes life is just random and you have to try again.

It’s important to find a balance between over analyzing and never reflecting on what contributes to your failures and rejection.

There is not just one calling for your life, the meaning of your life can change over your lifetime. It reflects the choices and experiences of your life.

In the end the only thing that matters are the positive changes you’ve made in the lives of other people.

How to write a simple webscraper with PHP

Exploring the API of the myBFH application for Android